October is Depression Awareness Month and Thursday, October 5th, is National Depression Screening Day. The National Institute of Mental Health recognizes depression as an ever-increasing health problem in the United States, with a lifetime prevalence of nearly 20%.  In addition, several recent reports suggest that rates of psychological problems, including depression, are on the rise among college students. The good news is that nearly 80% of people with clinical depression can be treated successfully.

Members of Active Minds (a student run campus mental health awareness organization) will offer a free and confidential depression screening on that day. The screening also assesses the possible presence of bipolar disorder, generalized anxiety disorder, and posttraumatic stress disorder. The screenings will take place in the Lower Level of Gallagher Center from 11am-4pm and will involve anonymous administration of a brief questionnaire.  For those concerned about a relative or friend, numerous informative brochures will be available. Referrals also will be provided. Those who take the screening measure will be entered into raffles for gift cards and the highly sought after Sigmund Freud action figure! 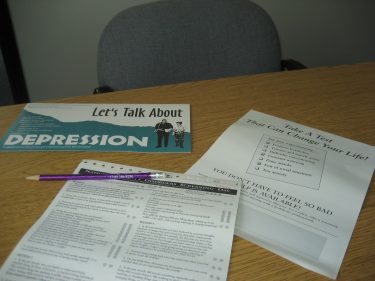 Further information about the depression screening may be obtained by calling Dr. Tim Osberg of the Department of Psychology (extension 8524).