Mr. Robbie Robertson was awarded a Lifetime Achievement Award at the Six Nations Reserve in Canada on October 14. Niagara University was represented by Dept. of Theatre and Fine Arts adjunct Randy Andropolis, who delivered an address commemorating Mr. Robertson’s career and impact on popular music.

An Indigenous Canadian, Robertson was leader of and songwriter for The Band, a musical force in the 60s and 70s, as well as being Bob Dylan’s backing group from 1965 to 1974. In addition to pursuing a successful solo career, Robertson has steered the music for such films as Raging Bull, The Color of Money, Any Given Sunday, Shutter Island and The Wolf of Wall Street.  He has been inducted into the Rock N Roll Hall of Fame, as well as been recipient of many other awards.

For more information about the event: http://www.brantfordexpositor.ca/2017/10/15/robertson-honoured-by-six-nations 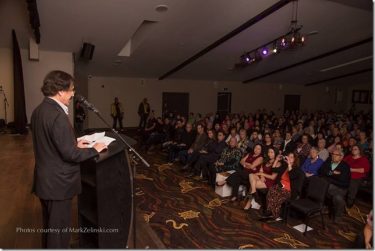